To upload a model artifact to Fiddler, you need to package your model into a format that Fiddler understands.

A model package should contain:

A model artifact is a serialized representation of your model as a Python object.

Artifacts can be stored in a variety of formats. Some include

To start, place your model artifact in a new directory. This directory will be the model package you will upload to Fiddler.

Fiddler’s artifact upload process is framework-agnostic. Because of this, a wrapper script is needed to let Fiddler know how to interact with your particular model and framework.

The wrapper script should be named package.py, and it should be placed in the same directory as your model artifact. Below is an example of what package.py should look like.

The only hard requirements for package.py are

You'll need to construct a YAML file with specifications for how your model operates. This can be easily obtained from fdl.ModelInfo() object.

For information on constructing a fdl.ModelInfo() object, see Registering a Model.

Once you have your fdl.ModelInfo(), you can call its fdl.ModelInfo.to_dict() function to generate a dictionary that can be used for the YAML configuration file.

Note that we are adding model key whose value is the dictionary produced by the fdl.ModelInfo object.

Once it’s been created, you can place it in the directory with your model artifact and package.py script.

The last component of your model package should be any serialized preprocessing objects that are used to transform the data before or after making predictions.

You can place these in the model package directory as well.

For example, in the case that we have a categorical feature, we may need to encode it as one or more numeric columns before calling the model’s prediction function. In that case, we may have a serialized transform object called encoder.pkl. This should also be included in the model package directory.

Suppose we have the following dataset for which we've trained a model. 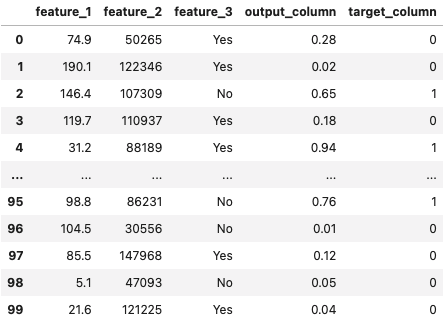 We would like to write a package.py script for this model.

We will have to encode feature_3 as numeric in order to run predictions on the data. For this, we have a serialized preprocessor (encoder.pkl) that we will load along with the model artifact.

Below is an example of how we might construct our package.py script.

The final model package will look something like this: 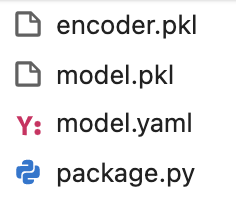 Once you've designed your model package, you can upload your model using client.add_model_artifact().

Updated about 2 months ago