Fiddler provides powerful visualizations that can explain your model's behavior. These explanations can be queried at an individual prediction level in the Explain tab, at a model level in the Analyze tab or within the monitoring context in the Monitor tab.

Fiddler’s explanations are interactive — you can change feature inputs and immediately view an updated prediction and explanation. We have productized several popular explanation methods to work fast and at scale:

These methods are discussed in more detail below.

For tabular models, Fiddler’s Point Explanation tool shows how any given model prediction can be attributed to its individual input features.

The following is an example of an explanation for a model predicting the likelihood of customer churn: 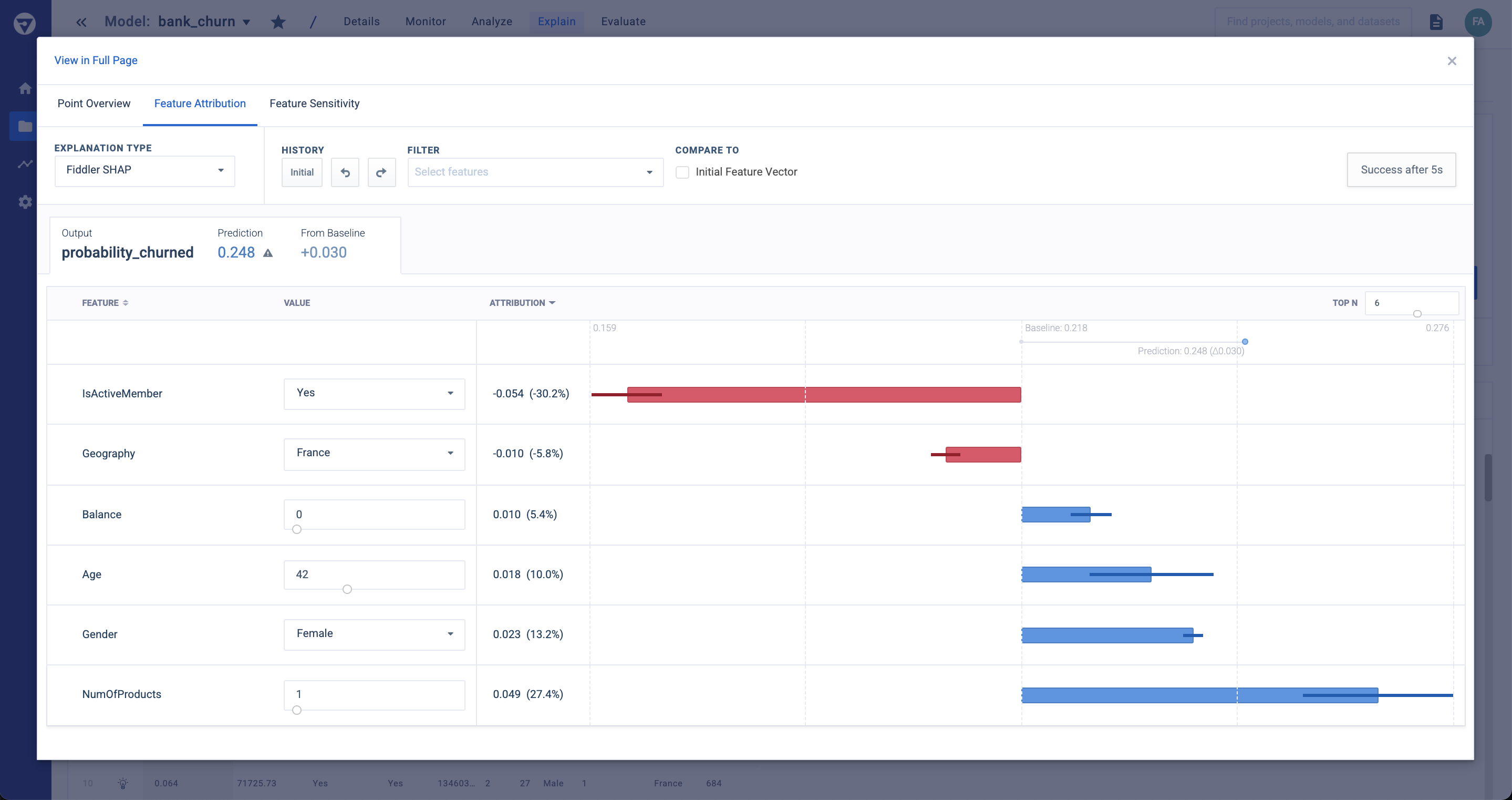 A brief tour of the features above:

Two numbers accompany each feature’s attribution bar in the UI.

An input box labeled “Top N” controls how many attributions are visible at once. If the values don’t add up as described above, it’s likely that weaker attributions are being filtered-out by this control.

For language models, Fiddler’s Point Explanation provides the word-level impact on the prediction score when using perturbative methods (SHAP and Fiddler); for the Integrated Gradients method, tokenization can be customized in your model’s package.py wrapper script. The explanations are interactive—edit the text, and the explanation updates immediately.

Here is an example of an explanation of a prediction from a sentiment analysis model: 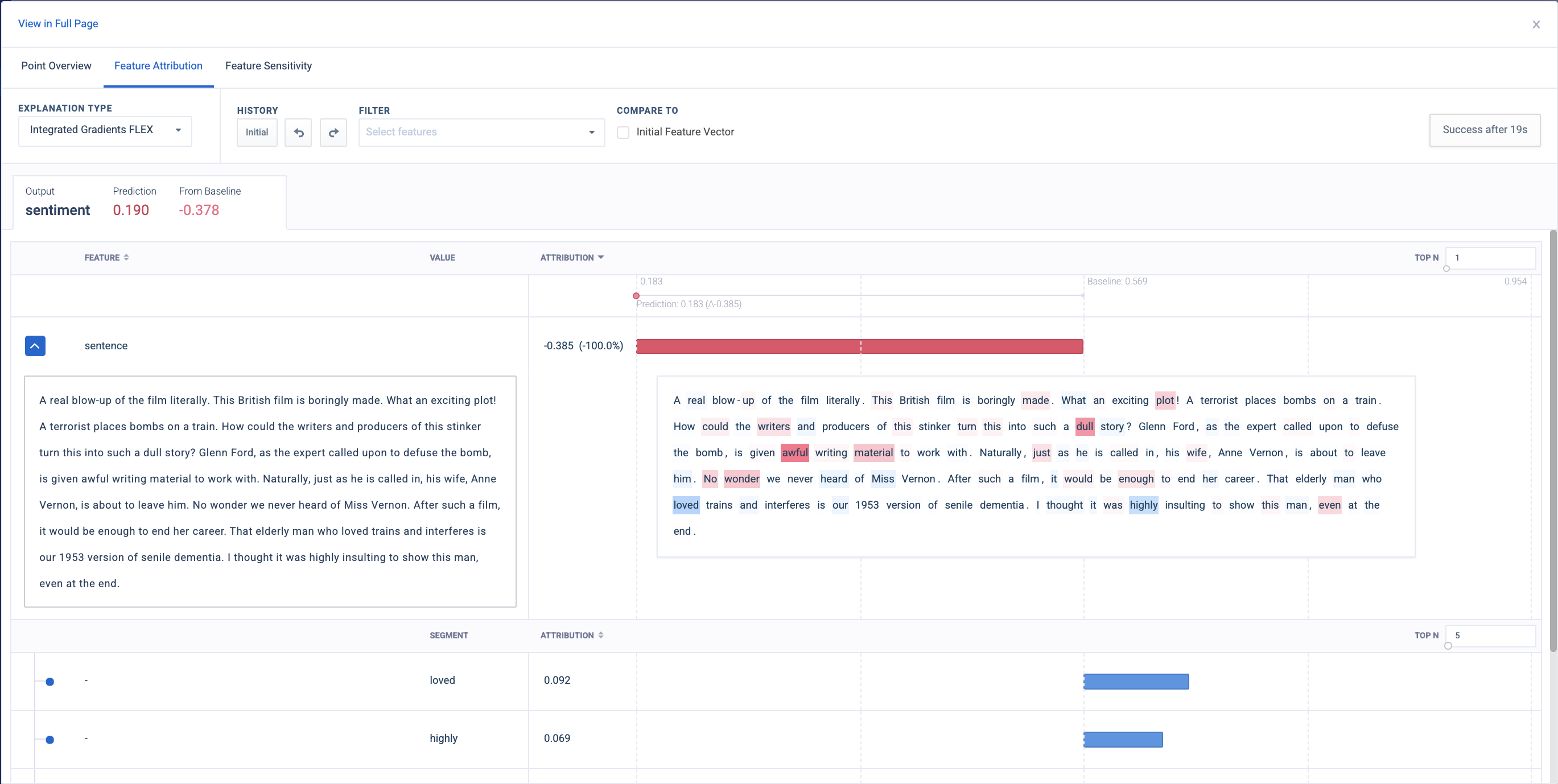 Point Explanation Methods: How to Quantify Prediction Impact of a Feature?

One strategy for explaining the prediction of a machine learning model is to measure the influence that each of its inputs have on the prediction made. This is called Feature Impact.

To measure Feature Impact, additive attribution methods can be quite powerful. Fiddler includes:

Each feature is assigned a fraction of the prediction difference for which it is responsible. This fraction is called the feature attribution, and it’s what we show in our explanations.

Additionally, each of these methods takes into account interactions between the features (e.g. two features that have no effect individually but in combination change the model output). This is explicitly built into the Shapley value formalism, and is captured in the path integral over gradients in Integrated Gradients.

Shapley Values and their Approximation

The Shapley value[1] (proposed by Lloyd Shapley in 1953) is one way to derive feature attributions. Shapley values distribute the total payoff of a collaborative game across a coalition of cooperating players. They are computed by tabulating the average gain in payoff when a particular player is added to the coalition, over all coalition sizes and permutations of players.

Why do we create “coalitions” with only a subset of the features? In some scenarios, it may be appropriate to replace a feature with a zero value when removed from the coalition (e.g. text models where no mask token is available). In others (e.g. models with dense tabular inputs), values are swapped in from a reference distribution or baseline example as a zero value may have a specific meaning (like zero income on a credit application).

Shapley values have desirable properties including:

Approximate Shapley value methods can be used to explain nearly any model, since you only need to be able to ask the model for predictions at a variety of positions in the feature space.

For models whose prediction is continuous and piecewise differentiable in the feature space, it can be useful to provide additional information through the gradient (slope vector) of a prediction.

Fiddler supports Integrated Gradients (IG)[4]. In this method, an approximate integral tabulates components of the slope along a linear path from baseline to explain-point, and attributes them to respective input features. This has several advantages:

[^1]: Join our community Slack to ask any questions

Updated about 2 months ago